I got to go on a random Ramen Run on Saturday. Aaron and I have always talked about going to Amoeba Music some day to check out the selection. The place is off Sunset and Ivar. I love how big the place is. 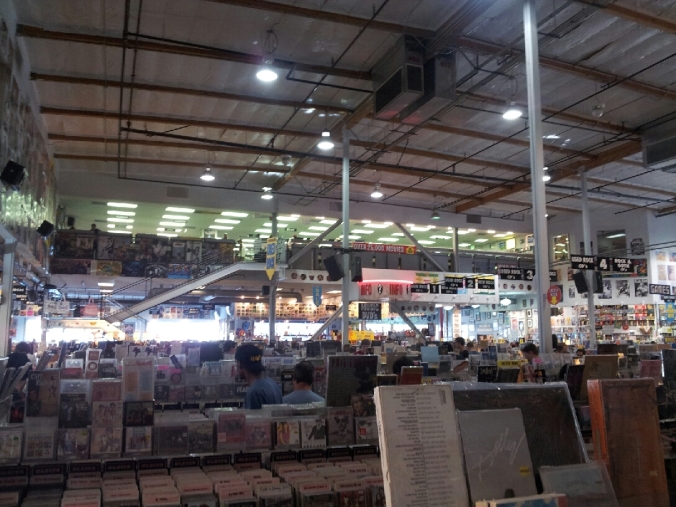 So much to choose from. From cds, vinyls, dvds, vhs, even laserdisc hahaha!

We were actually getting really hungry so I had an idea to eat ramen because we were in LA and I rarely go because of the traffic really. Aaron agreed to go to Jinya Ramen in Studio City. My Google Maps said it was 14 mins away but you know LA traffic, it would probably be 30 mins. But after a couple mins driving our way there on Sunset Blvd, I saw this place 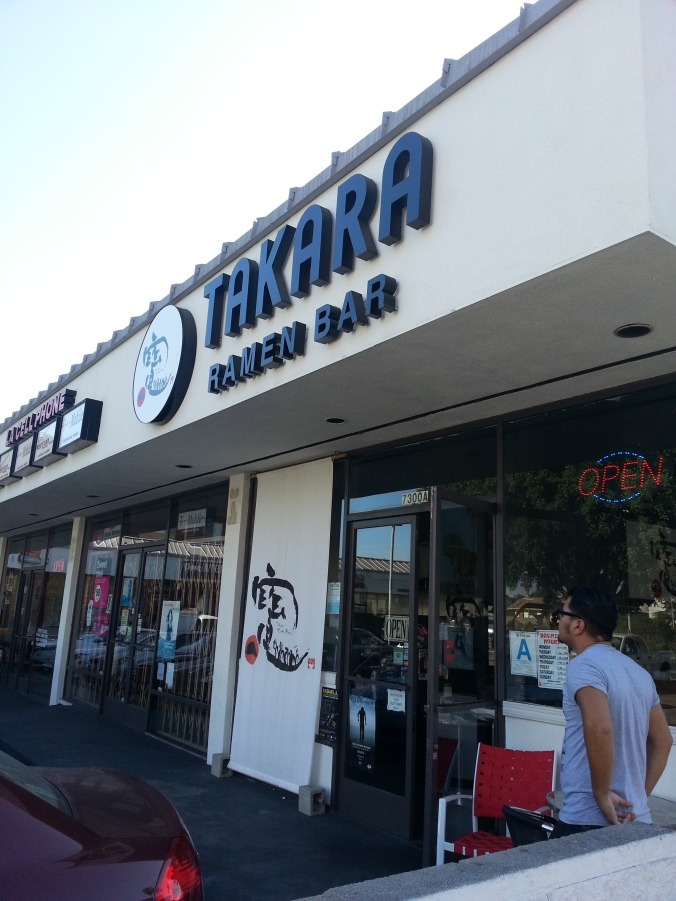 Takara is a pretty small place located in a small plaza but it was at the end so it was pretty easy to spot but pretty hard to get to because making a left turn when you have to yield is impossible. We ended up parking about maybe a half a block away and paid for parking. I wasn’t sure how long we were going to be and put in money for an hour and 30 mins. (proved to be too much time, even for a Saturday) 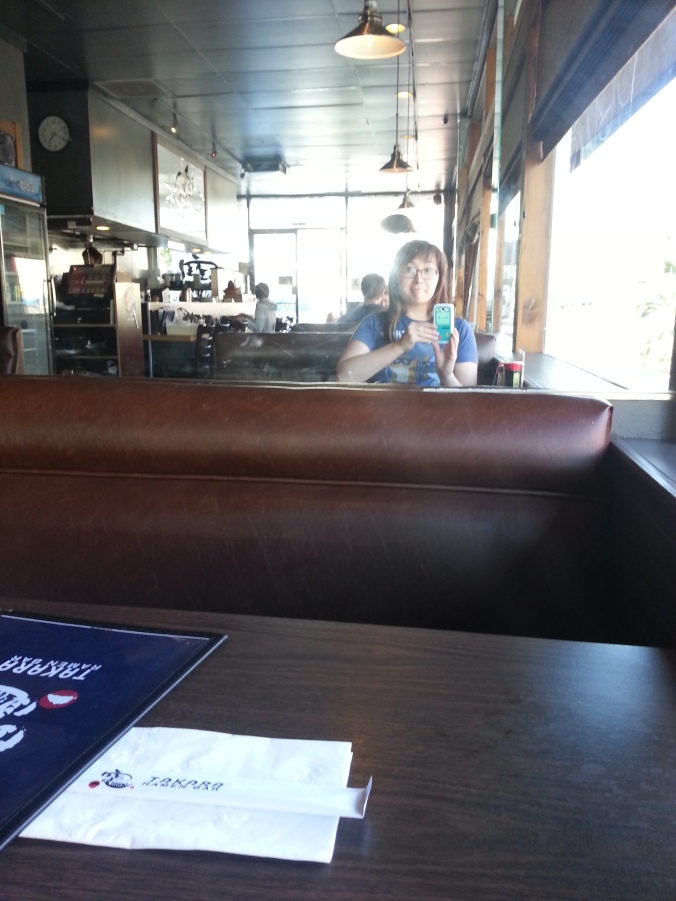 The place is a bit on the narrow side so you probably don’t want more than 4 people in your party. There is a bar that fits about 8 people and 8 four persons booth and one 2 seater booth for you lovely dovey folk 😉 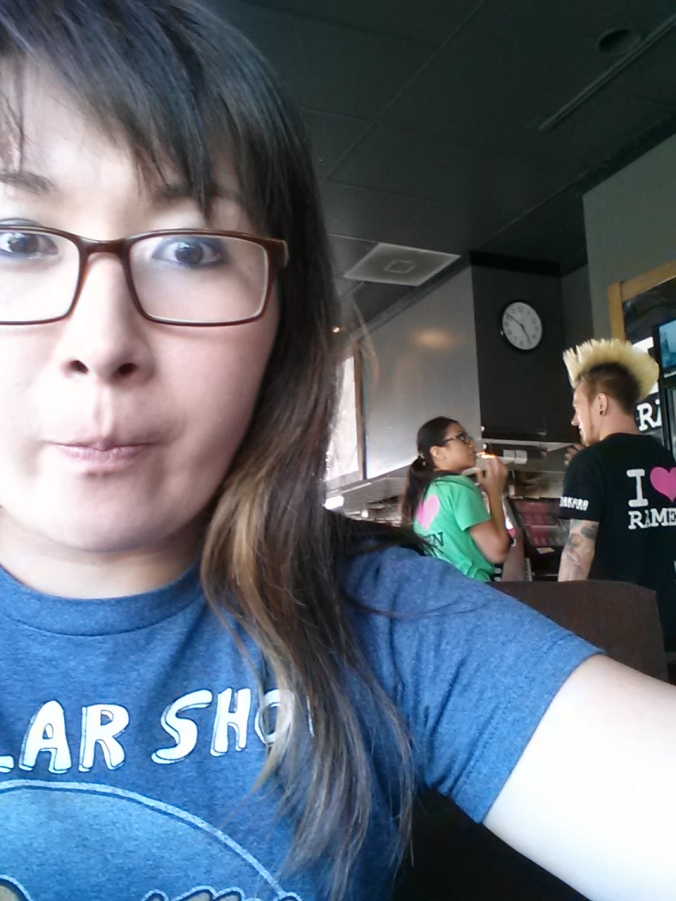 Some people on staff are pretty fashionable but they are pretty nice and attentive. There is a board in the bathroom with the whole staff and some of their menu recommendations. 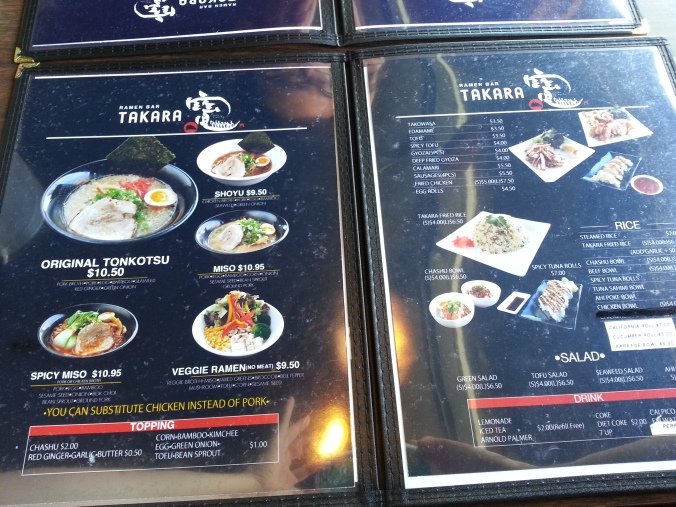 The menu is pretty simple. There are only two pages but you know what? I really like that because then they focus on making everything really good. 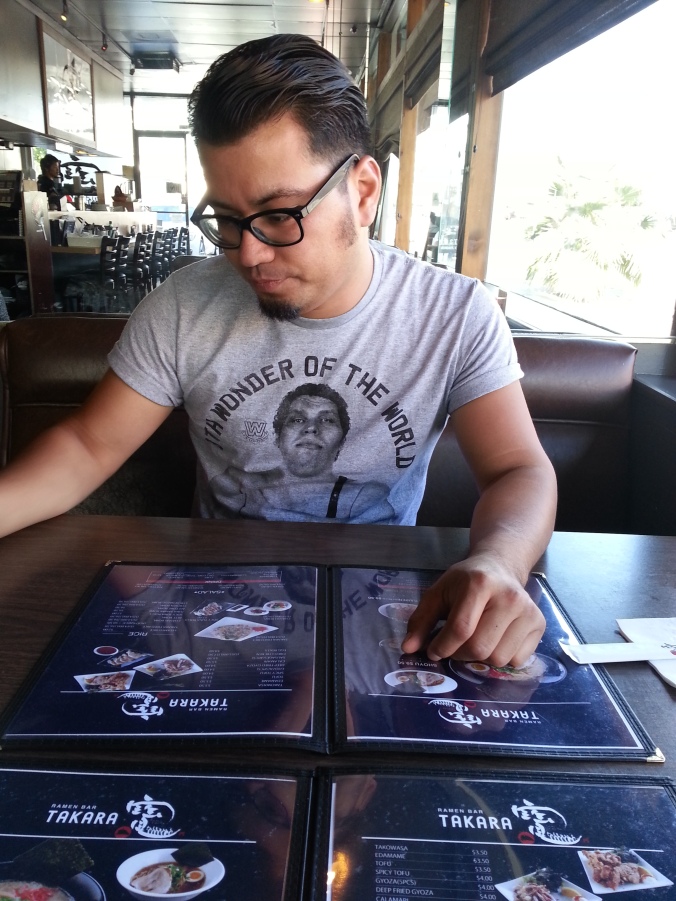 We actually didn’t bother looking up reviews of the place because we were pretty hungry but still kind of skeptical. Aaron wasn’t feeling soup that day for he ordered from the appetizer side of the menu.

We are patiently waiting for our food 😛 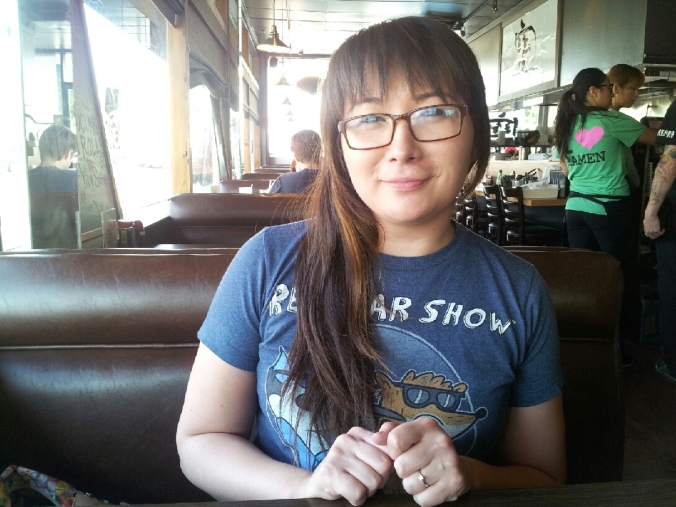 Our food actually came to us pretty quickly. I’ll go in order of how the food came. 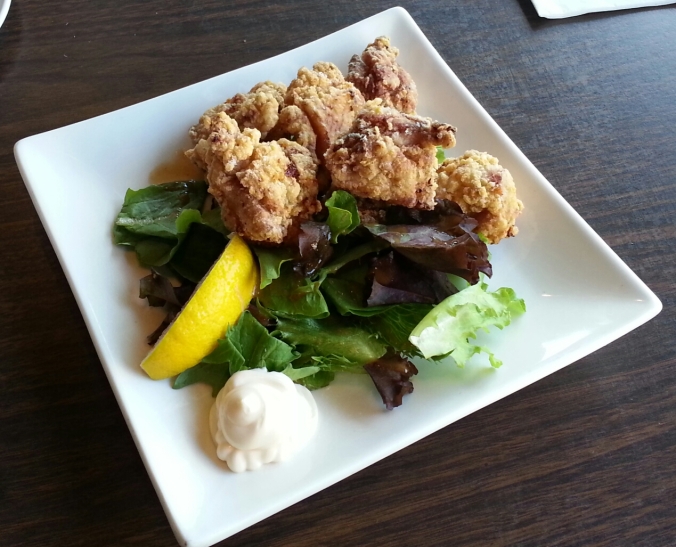 We looked at the fried chicken funny because it looked so weird but when we asked the waitress, she recommended it because they bread the chicken in the kitchen. None of that frozen stuff. It was so good. We sprinkled it with lemon and dipped it in a mayo sauce. The breading actually tasted like it had a really light ginger taste to it. It was piping hot and was really tender. I would recommend it to everyone to try it and forget KFC forever. 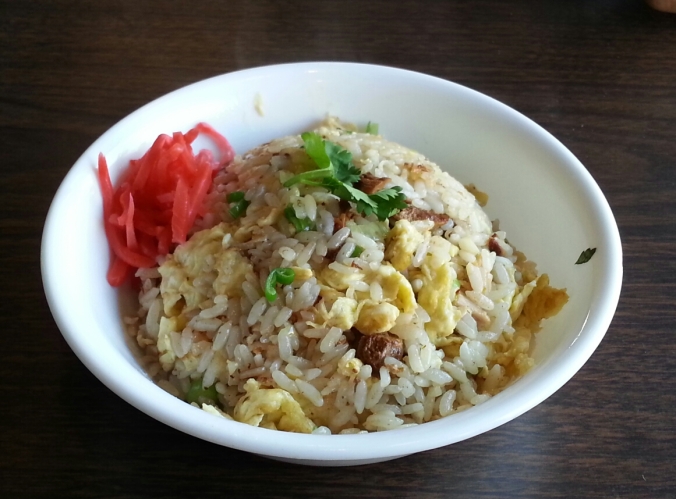 He also ordered the Takara fried rice. It was really yummy. It had small chunks of chashu and it was tender, so I was pretty excited for my ramen. 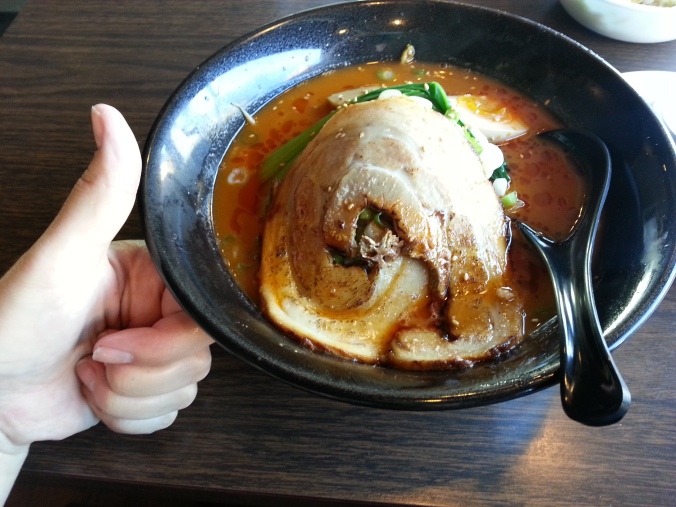 I actually stepped out of my comfort zone and ordered the spicy miso. I usually hate hot and spicy soups but I stuck to my guns because I was just talking to Joan earlier in the week when we met up for drinks and told her I wanted to try a spicy broth.

It was…….AMAZING! Such a strong flavor, but not overpowering. It actually wasn’t spicy at all. It looks oily but it wasn’t. It wasn’t too spicy. It was a thick broth, almost creamy like a tomato soup kind of consistency. LOOK AT THAT CHASHU! When they delivered it to me I exclaimed with a “Waaahhh~” It was a thin slice and it was falling apart when I picked it up with chopsticks. It had a nice amount of fat, the meat was a tad on the tough side but not too tough. It was delicious. They egg was great. They cooked it just right to where the yolk wasn’t all the way cooked. The noodles were a heavenly chewy texture. The melody of veggies fit just right and picked up the broth’s flavor just right. I really liked the bok choy, I actually ate that first. I even tried to eat all the veggies when I was done with the noodles but I got really full. It had a lot of bean sprouts, onion and bamboo. It even had a ground meat at the bottom. I want to assume it was ground pork to enjoy at the end. Even though Aaron said he didn’t want ramen, he couldn’t help himself and ask me for a few bites and he became a fan of Takara in an instant haha. 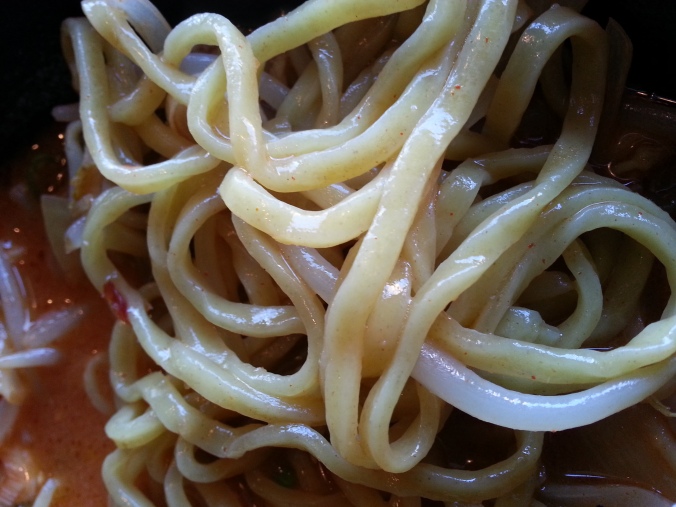 If you look closely, (not the red specks) you can see the noodles had a grain look to them. I do wonder what kind of dough they used but it was one of the best I’ve ever had.

Afterwards we wanted to do more things in LA because we really don’t go as often. We thought Griffith Observatory would be a great idea……… Nope. I don’t know what made it so special that day but the parking lot was so full that people had to park along the road (we saw one person bump into a parked car and decided not to stay) the parking along the road was a little over a mile long and we said no because we didn’t have coats and I was wearing the wrong shoes.

That is about as close as we got. If you want to head up there then I would suggest you go pretty early to beat the crowd. 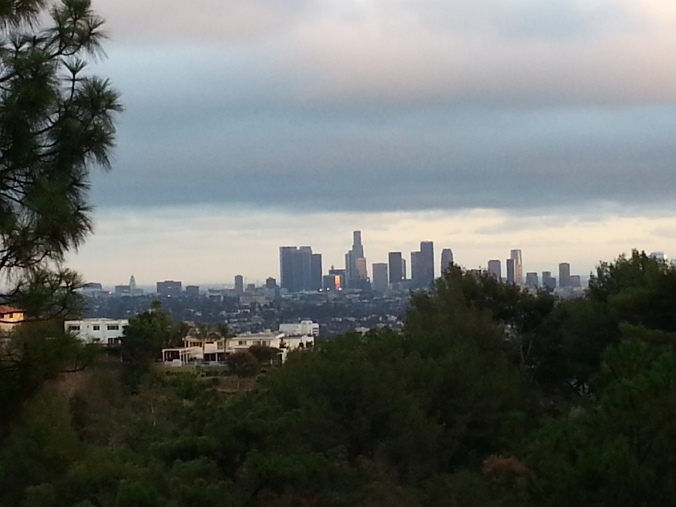 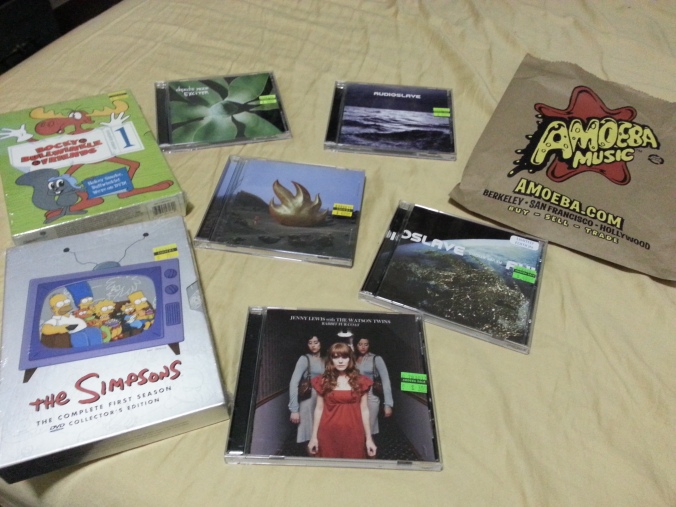 Even though didn’t get to the observatory we got some sweet buys at Amoeba.

So my last thoughts. I would 100% go back again and recommend anyone to stop by. I would love to try other things on their menu, like the Ahi Poke bowl. There is a lot to do just in that area that it would be worth all the frustration of traffic. I know its kind of gross but even my burps were wonderful hahaha.

2 thoughts on “Surprise on Sunset”