Remember that movie, Backdraft? With Kurt Russell, William Baldwin and Robert de Niro? Well, I never saw it. But I remember that one part of the tram ride at Universal Studios, where you’re in a roaring warehouse inferno. Anyway, that’s besides the point.

I recently went back to Ikemen Dip Ramen in Little Tokyo with a friend. When we arrived, the restaurant was pretty empty. The same server I had last time was working that night, and there was a ginger fellow cooking behind the bar. They both wore cool hats, by the way. We both ordered the Backdraft Dip Ramen. (See, I had a point! Sorta…) 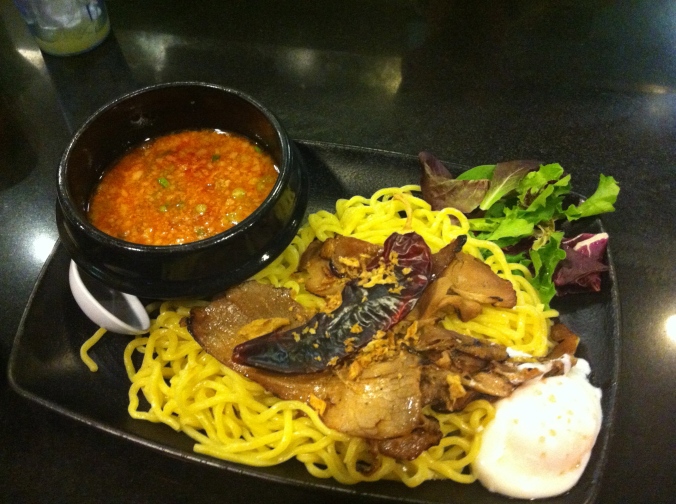 A roaring inferno in our mouth!

The Backdraft Dip Ramen was quite good! It was bit saltier than I would prefer, but the overall flavor was great. It was gravy-like, which is exactly how it should be for dipping ramen. The noodles were cooked perfectly, and the chashu was good. I added the onsen tamago (the soft boiled egg) to make the broth extra creamy. As far as spiciness, I ordered the mild, which would be about 1 out of 3 in heat levels. I really like Ikemen and would not mind coming back here more often. The food is great, the service is awesome, and it’s just a really cool restaurant!

CASH ONLY! Parking is all over the area, but not free most of the day. There’s also a parking structure near Weller Court.