It felt so good to wake up and not feel hung over! I have to point that out because you know how things get every time I hang out with Michelle. I have to stop getting us into trouble! But last night was a sober yet enjoyable evening.

After work, Michelle met with me in Downtown again. Shalini, who I had mentioned before, recommended another ramen joint in Little Tokyo called Men Oh Tokushima Ramen. I had not been to Little Tokyo in a while and it was such a nice afternoon to go for a walk.

Pardon my obsession with buildings… 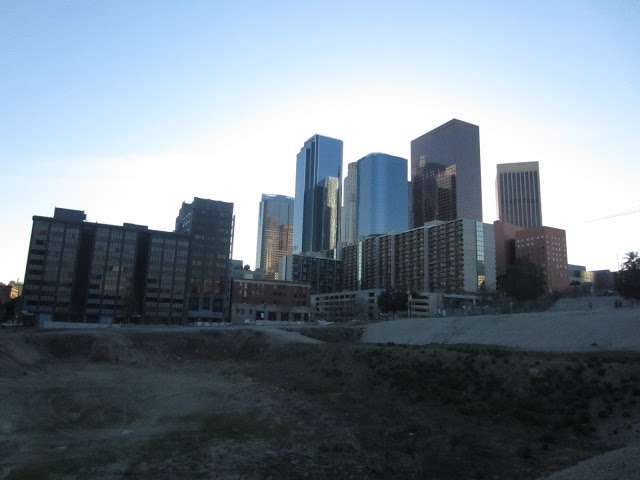 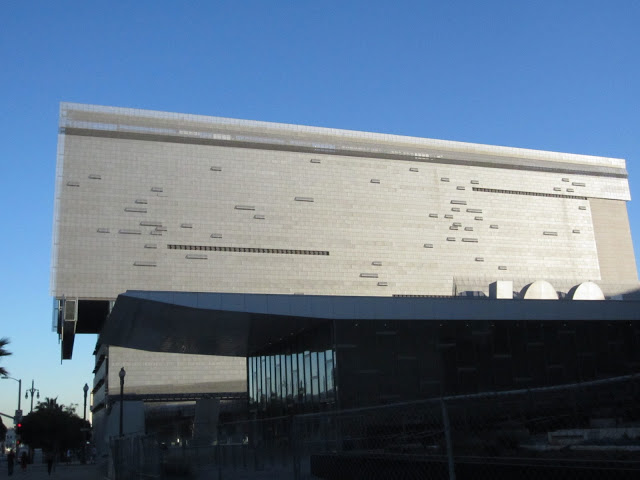 Caltrans District 7 Headquarters. I’ve walked past this building so many times at night that I never knew how cool it looked during the day!

Men Oh is located in the Honda Plaza in Little Tokyo, on the corner of 2nd Street and Central Avenue. There are a few pastry shops and cafes in the plaza and what seemed to be a really popular sushi restaurant called Sushi Gen. There was a long line outside and I have never seen that at a sushi place! Maybe I’ll try it when I don’t feel like having ramen…

My sister’s name is Frances. Just thought I’d point that out…

We arrived 20 minutes before the restaurant opened at 5:30. At first it concerned me that no one was waiting outside with us. But I looked them up and found that they have only been around for 4 months. They also had very good ratings on Yelp so I was very excited to try their ramen. 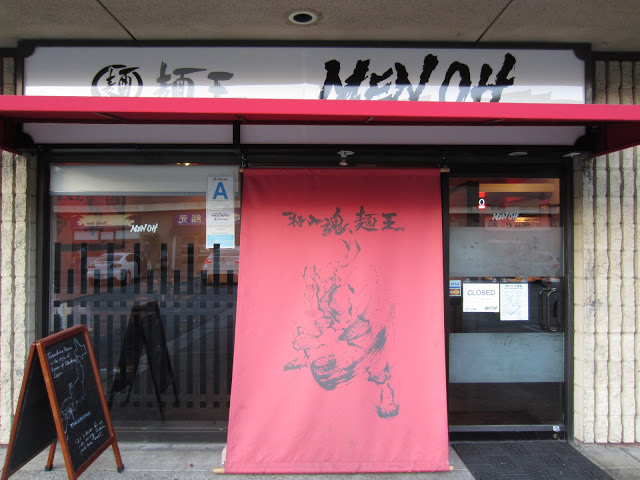 The restaurant was small, with one side of regular seating and the other side with bar seating. We seated ourselves at the bar like usual but I was disappointed to find that the kitchen was not behind the bar, but behind a wall, so we couldn’t see them in action with the ramen! We could only see them scoop up rice from the bar. I noticed that the staff were either Japanese or Japanese-American. We were the only ones at the restaurant for a good 20 minutes, but people started pouring in quickly after that. There were Japanese customers there and that was a good sign! 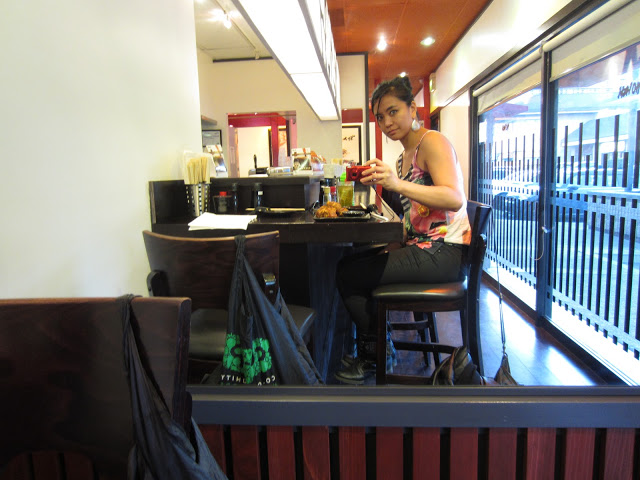 The restaurant looked huge from the outside but that was because of this mirrored wall!

We started off with some green tea and chicken karaage. Their karaage was very moist and tasty with a touch of ginger. It was a little difficult to eat though because they were huge chunks of chicken! I’m not a ginger fan but this was pretty good.

Men Oh’s specialty is their Tonkotsu-Shoyo broth so I ordered the Tokushima ramen, which included a slice of chashu, butabara (fried pork belly strips), half of a seasoned soft-boiled egg, green onions and menma (which I asked not to include). Michelle ordered the same with deluxe toppings of seaweed, kimchee, spinach, bean sprouts and sliced mushrooms. 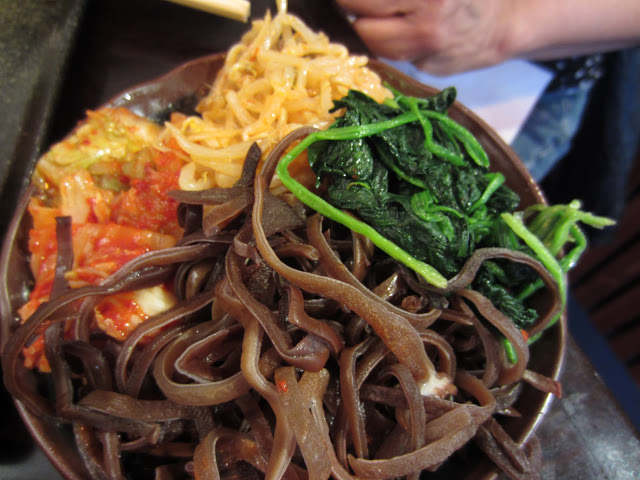 Michelle told me that I should not be too nice when reviewing ramen places. She’s right though, I am guilty of being too nice. But oh man, this place is really good! Seriously, I’m not just being nice.

The broth had a clean taste to it. It was light in texture, but rich in flavor. It was very porky compared to other places that serve tonkotsu, but it was not overbearing and you can still taste the shoyu flavor. I liked that there was very little oil and I’m pretty sure it did not have MSG. Some ramen places leave a strange after taste that took a while to get out of your mouth, like Tatsu Ramen, but Tokushima’s broth had a nice, subtle consistency. I wasn’t too crazy about the noodle texture though. It was cooked firmly, but it was a little too doughy. The seasoned soft-boiled egg had a good flavor and was cooked perfectly, with a little goo in the middle. I wish they gave the whole egg! The chashu was tender with a great flavor but they give you a thin slice. I normally don’t like pork belly, but their thins slices were actually very good and I enjoyed the flavor. And the best part was, they remembered not to include the menma!

Overall, I really like Men Oh. I think I would choose to go here over Daikokuya any day. Daikokuya has become overrated anyway. They’re still good, but I think Men Oh’s broth is way better and not that oily. They also have just a plain tonkotsu broth ramen which I really want to try next time. The service was also great. The staff was very friendly and helpful, and always checked to see how we were doing.

Thanks Shalini, for pointing me this way!

The night was young and after being stuffed with good ramen, we walked it off in Little
Tokyo.

Cute, little restaurant with pretty lanterns and a sake display!

Ellison Onizuka was the first Asian-American astronaut to reach outer spaceand he was also from Hawaii. Challenger Memorial on Onizuka Street, LA City Hall in the background

Shop-Ashiya is a cute clothing store and had a cat living there. The lady who worked there was intimidating at first, but she was actually very nice and gave great fashion advice!
I bought a few dresses.

Heck Yeah Karaoke Night at the Japanese Village Plaza. Some serious karaoke singers
came up that night… It was… entertaining.

Awesome vanilla caffe latte from Cafe Dulce. The best lattes I’ve ever had! 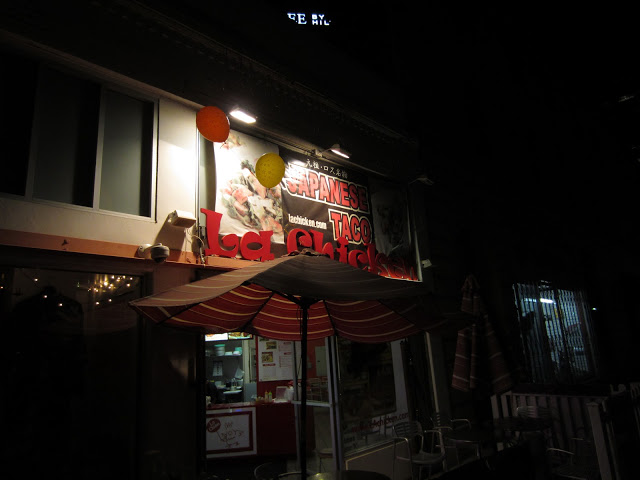 The Honda Plaza has paid parking and can get pretty crowded on a Friday night.