After more than two years since graduating from college, I decided to take drum lessons again. I’m pretty good about learning things on my own and finding learning resources, but I got really bored and wanted someone to tell me what to work on. And I wanted someone who was different from the teachers I have studied before . I got in touch with Chris Wabich, a drummer who went to my college long before I was there, and performs with a percussionist that I had studied with. I met him during my last year in college at a clinic I attended. He seemed like he would be fun to study with because he knows a lot about middle eastern instruments and applying those styles to drumset.
My first lesson with him was really cool. He had two drumsets set up and we worked on odd time signatures. It was really cool playing along with a teacher! Chris had a few cool tricks that I definitely apply to my playing now, with how to keep time and how to feel an odd-time groove. I highly doubt I would play odd-time stuff regularly, but I thought it would be a great way to expand my playing and improve my time. And you never know when someone might randomly ask me to play in 7/8 followed by 5/8 followed by a 9/8. Cuz you know, that could happen. 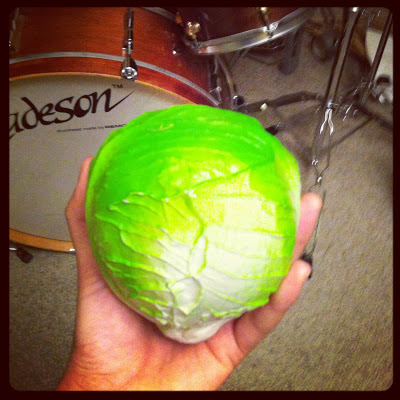 This was a cabbage shaker he had. I had to take a picture of it.
I think Chris had been aware for a while I was a ramen junkie. (Chris happens to be a boba fanatic.) He lives near downtown LA so we got ramen with his friend, Amy, at Shin Sen Gumi in Little Tokyo to catch up. The ramen was awesome at SSG in Little Tokyo, like always. It was a really nice evening so we sat outside. The only thing that might be bothersome about sitting outside is that you can’t order alcohol and every now and then, a bum will come up to you.
After my lesson and some good ramen, I felt really inspired. Learning new things and eating good food always puts me in a good mood.
The end.
Joan