Hey everyone!
Two weeks ago, my cousin, Michelle, took me out for a late birthday dinner. (My birthday was back in April) I was already working in downtown LA that day and thought it would be great to check out the new Shin Sen Gumi in Little Tokyo.
I got out of a really LONG work day, so an ice cold beer sounded amazing. I forgot how good Orion beer was. It’s too bad they’re hard to find!

This was the most refreshing Japanese beer I’ve ever had
Michelle has been to the Shin Sen Gumi with me in Fountain Valley, although she couldn’t remember how she ordered her ramen. We both ordered their specialty, tonkotsu ramen, with hard noodles, strong broth, light oil, extra chashu, and flavored egg. But I had my ginger removed. At the other Shin Sen Gumi’s, they throw all the toppings into the bowl, but here, they were set aside. It wasn’t that big of a deal, but I usually prefer all the toppings in there right away so they would already be warmed by the broth!

They serve the extra toppings separately from the ramen

The ramen was amazing. From a rating of 1 through 10, I give it a 10. There was nothing to complain about! They made the ramen exactly the way I wanted and I finished my entire bowl. I probably say this all the time about Shin Sen Gumi, but they really do make a good bowl of ramen. Just go there! I’m telling you, you won’t regret it!

It was hard to compare if the Little Tokyo branch was better than the other ones we have been to. The Rosemead and Fountain Valley restaurants seemed equally good lately, as if they finally shared their broth recipe with one another. Now I have to pay a visit to the Torrance restaurant to see if there is consistency.

The chandelier is made out of the noodle baskets!

Where the magic happens

Anti-bird sign (if you look closely, there are spikes above it!
If I had to choose which Shin Sen Gumi I would prefer, I would probably pick this one in Little Tokyo. I think the environment of dining out is just as important as the taste of the food. The area has such a fun vibe with cool little shops, cafes, grocery stores and everything else that’s Japanese. Every time I’m in Little Tokyo, I just want to keep eating. And of course, we can’t forget the One Man Band!

So… we ate again. We found a little cafe (forgot the name) for some coffee and dessert. And I can’t help but think that I had the best latte I’ve ever had there. It was just the right amount of everything: flavor, sweetness, frothiness. Just perfect. Then there was dessert… 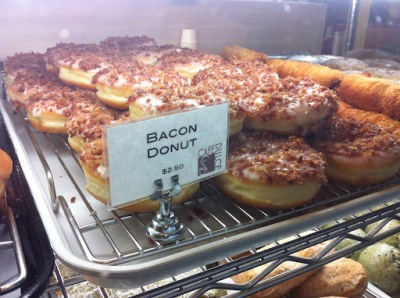 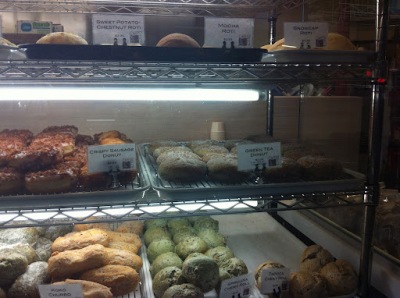 My bacon donut and goofy smile

Yep, I took a bite out of that handful of heart attack!

That’s how much of that donut I left for Michelle

I know that bacon donuts sound disgusting, but it tasted really good! You have to try it at least once in your life. 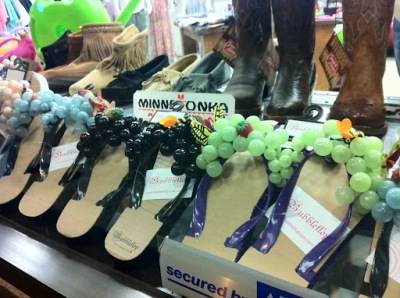 Grape toes
After the awesome ramen, coffee and bacon donut, (seriously, that donut was good!) we did some people watching, ran into an interesting fellow I knew, (not gonna go there) then ended the night back at Michelle’s with some Red Stripe. That was a fun evening and definitely a great birthday dinner!
In case you want to visit this particular restaurant, you can’t find it on Google maps just yet. The address is 132 S. Central Ave, Los Angeles, CA 90013.
This summer, Tanya and I plan to take over another ramen region. Torrance sounds like the ideal place since we have been hearing great things about ramen there. Hopefully we’ll be better at updating our blogs as well.
Thanks for reading!
Joan

One thought on “Birthday Ramen”