Here’s another overdue blog for ya! I went on a ramen run with my brother, Mark, after work one day (December 12… yeah I know.) I mentioned before that I work in Pasadena, and from time to time, Mark works in Pasadena as well, at the Rose Bowl. We were pretty hungry and was craving a nice bowl of soup so we decided to eat at Naga Naga.

I’ve actually grown to like this place, just because I know what to expect and sometimes they actually make a good bowl of ramen. We got in and was seated right away. There was a section of tables for 2 at the front, and were seated there. A few couples came in and were seated in the same area. They seated a couple right next to us, a table that was only one foot away.

This was when it got awkward. Well, only because I thought they were an odd couple. The guy was this tall, buff white dude, who looks like he works in construction. The girl was this kind of chubby Japanese girl, who wore a really short skirt and long leather high-heeled boots. Yeah… Sorry, but she looked like a hooker. And the only reason why I knew what they did and where they were from was because they were pretty loud in their conversations. The guy talked about his job and the girl talked about having ramen back home (in Japan). She also had a thick Japanese accent. (By the way, she didn’t say she was a hooker or anything) The whole time, my brother and I would text back and forth, trying to figure out what this couple is all about. From what we heard, they were probably friends since they said they haven’t gone out to eat together in a long time, and would ask one another what they’ve been up to lately. But the guy just sounded like a dumb jock and the girl was very air-headed. They were perfect for each other. I don’t mean to be mean, but they were pretty strange and they definitely distracted us. I wish I had photos of them. (trust me, I tried to sneak a shot but it was difficult to go unnoticed)

Back to the ramen. I ordered the Kimchee ramen and my brother ordered the Naga Naga. We both ordered their matcha green tea milk tea. For some reason, I was really craving this kimchee flavor. I’ve had the packaged kimchee ramen before and have always been curious about how the real thing would taste like. Well, it didn’t taste anything like the packaged stuff! My ramen had the miso soup base with the kimchee flavor. It was pretty good and I was glad it wasn’t unbearably spicy. I loved that it had tons of veggies and little pork bits. I wouldn’t mind having a bowl of this stuff again, especially on a really cold day and if I had a cold.

But I mixed it and there it was! Greeeeen!

Mark and his Naga Naga Ramen 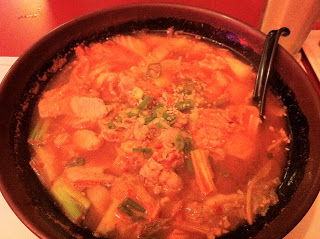 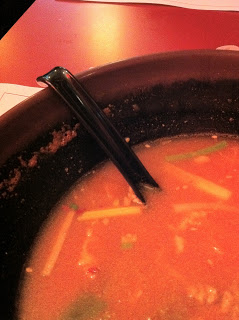 I love places that have those hook spoons! I’ll never lose my spoon in the soup!

Naga Naga isn’t so bad after a few tries. It’s still not one of my favorite places, but it’s one of those places I wouldn’t mind going to if I was in the area and craving ramen. I’m glad that I’m venturing out to other ramen flavors. I feel like I’ll have better knowledge of ramen the more I do this. Anyway, here’s to another overdue blog!